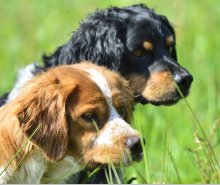 2 dogs in search, at the stop under the emanation of a game

The stop is a conditioned reflex of the dog which stops in front of the prey it wants to catch, because it is afraid of not succeeding.

A dog does not simply stop as soon as it perceives an odor or that it locates a prey, it stops in front of something which it considers impossible to catch: game in most cases, but it can be ‘a feather or even a piece of plastic. Instinctively, the dog searches for a solution to catch the coveted game.

Little by little, he develops this stopping instinct because he always keeps hoping to achieve it.

If the dog, especially when he is a teenager, realizes that he is in the presence of a game or an object that he can easily catch, the stopping instinct is erased and is transformed into a predatory instinct.

The stop instinct is getting better 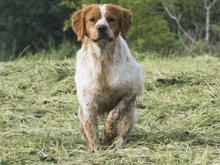 With experience, the best dogs can build a nose intelligence in balance with the stopping instinct.

Those who have the audacity, stop, sink, and block (risking everything being stolen), so that the master can get closer.

This is the most difficult to achieve.

A successful stop provokes emotion both in the hunter and the dog !!!

What does the dog do when stopped?

When stopped, the dog that has picked up an emanation tries to define how far away the prey is. If it moves, if it is about to take off or take off, or if it has left traces in the vegetation by going to hide and possibly go snorkeling.

As certain species of feathered and furry game like rabbits and hares know how to do.