The master, my father

My father was the undisputed master of all breeders and trainers of Brittany Spaniels from 1950 to 2000. Cited as an example by the most serious specialists, he left a trace of his work in all the dogs that currently win national and international working competitions.

Breeder-trainer of Brittany Spaniels at Callac de Bretagne, Guy Morin is the founder of Keranlouan breeding. His first illustrious dog, at the source of the production of his breeding, was Glazick de Keranlouan. She won several times the CACT (first national prize). 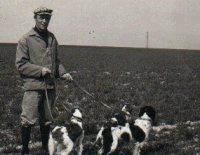 Birth of a new strain for the Breton spaniel

My father possessed an acute sense of observation, he easily detected the various points likely to improve the Breton spaniel.
He found that, despite his intelligence, his dynamism, his courage and his qualities of stopping and retriever, he lacked a bit of nose power compared to the English setters, but above all, he did not patronize*.
Sponsored by Gaston Pouchain *, he showed his skill using some setter blood to make the “retrempe” (blood mixing technique).
He created a strain of extraordinary Brittany Spaniels, the top of pointers !
Patrick Morin

* Gaston Pouchain: President of the Central Canine. He was president of the Breton Spaniel Club.
* Patronize: when a dog stops, the following dog it stops not to interfere.