What is a Pointing Dog ? 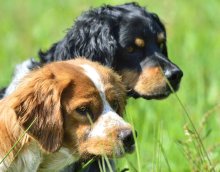 A retaining dog is a hunting dog which, by immobilizing itself, has the capacity to hypnotize a game it has within its reach.

This ability to find and stop birds and other game is due to his natural instincts, skills enriched by selection and training.

The Brittany Spaniel, originally from Central Brittany, is one of the most famous and widespread guide dogs in the world.

The different categories of Pointers

The English races are the setter, to point…

In addition, a distinction is made between short-haired, and long-haired pointers. 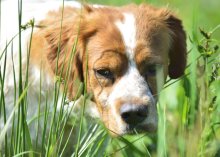 The natural qualities of the guide dog

Pointers have natural qualities inherited from their ancestors.

These basic qualities have not stopped developing over time thanks to the bond that some breeders have been able to create and maintain with their dogs.

In some breeds like the Brittany Spaniel, the stop instinct is not only innate, but also surprisingly precocious.
Brittany Spaniel puppies are able to stop from 2 months of age, under the best conditions.

There are two types of stops:

The Fédération Cynologique Internationale [ FCI ] which represents the World Canine Organization, has classified pointers in “group 7” among the 10 groups which bring together the different breeds of dogs.

Training, or training the retriever

It is preferable to use a method of gentle education where you will be attentive to your dog and attentive to its natural qualities, than an arbitrary training consisting in subjecting the dog to your orders, which will have the consequence of limiting the expression of his abilities.

Pointing dog education consists of optimizing the qualities of the dog inherited from its parents, such as the quest or search for game, the rise in emanation, and the stop itself.

The Quest or Search for Game

Depending on the exercise conditions, the dog adapts its way of collecting. When it searches in the wind, it moves in a series of laces, nose in the air to capture the emanation of a game carried by the wind.

When the dog runs with the wind on its back, it will look for the scent left by the game on the ground, which it will track. Or else, he will try to go “downwind” to better capture the smell.

As soon as the dog smells of game, he will adjust his quest by shortening his shoelaces to concentrate in the field of emanation.

The ascent is to zigzag inside a cone-shaped area until you get close enough to the prey. Then the dog freezes and marks the stop.

The operation is delicate because the bird should not fly until the master is able to shoot.

Immobilization of the dog or Stop position

The stopped dog immobilizes the bird with a hypnotic effect.

The hunter can calmly join his dog.

This is when the dog will “sink” to discreetly approach the bird, which will at some point take flight.

The well-trained Pointing Dog has positioned itself so as not to interfere with its owner or endanger itself.
The hunter only has to adjust his shot, and finally order the dog to go and bring the game.

The reference book on dog training

The Pointing Dog in Brief

The watchwords of the training dog are the quest or research of the game, the ascent of the emanation, the stop then the report of the dog, and finally the reward of the master.

The Brittany Spaniel is an internationally renowned guide dog : gundog-training.eu/the-breton-spaniel-is-an-excellent-pointer