Patrick Morin, the master breeder of Brittany Spaniels, runs the Keranlouan * breeding in Callac, Brittany. He participated from a young age in the awakening of hunting dogs. Thanks to his sensitivity, his sense of observation, he has developed a new method of education that ensures the development of the dog to bring out the best of what he has in him.

« His book, Keranlouan’s Secrets – Revolution in Dog Education », is rich in wise advice that everyone should have read before they even start educating their dogs, regardless of race. It is now published in 5 languages: English, Spanish, Italian, French and Russian.

* Keranlouan produced 10 champions of conformity to the standard in beauty and won more than 120 titles of working dog champion since 1960 in France. Several dogs have won titles in Spain, Italy.. 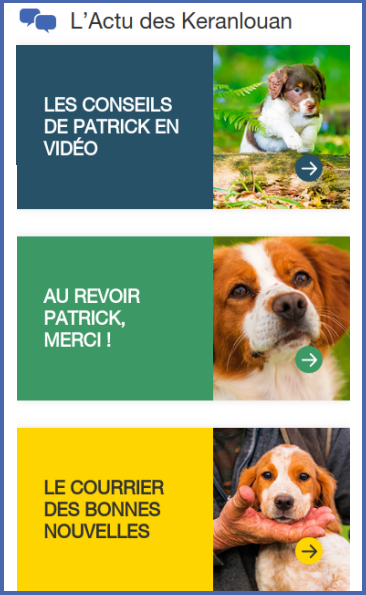 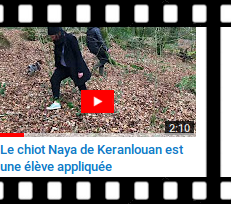 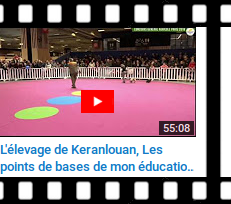 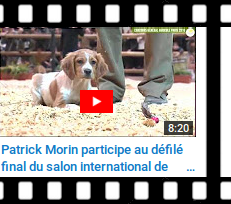 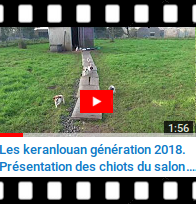 «The undisputed master of Breton spaniel trainer-breeders cited as an example by the most serious specialists, the man who has left a trace of his work in all the dogs which win at present the national and international competitions in work, is Guy Morin, my father, trainer-breeder of Brittany spaniels in Callac de Bretagne, founder of Keranlouan breeding, in the 1950s.
His first illustrious she-dog, source of his breeding production , was Glazick de Keranlouan. She won several times the CACT (first national prize).

My father showed his tact on the “retrempe” [mixing different bloods technique] of the Brittany spaniel using some setter blood.
He created a stock of extraordinary Brittany Spaniels, the top of pointers !
Tintin de Keranlouan was the first European champion in 1976. He became the undisputed king of Brittany spaniels: a marvel in terms of hunting, style, and standard.

Son of a breeder admired by all, very quickly, I had only one idea in mind: to do the same job as my father, become trainer- breeder of Brittany spaniels. »

Between 1960 and 2000, Keranlouan breeding produced an avalanche of champions. There are nearly 150 “Keranlouan» working champions, if we add the winning dogs in France and Italy.
Hostard de Keranlouan is today the most awarded dog, he holds the record of victories in the level of the working values ​​in the hardest discipline: the spring Field trial . On March 17, 2018, he won the Breton Field Special at Caulière.

« My favorite breeder is my own dog,” Eliote King of Keranlouan “. He has been twice French beauty champion, and national and international champion of natural game work, he obtainned four television reports. But beyond the titles, the most important is the relationship between Eliote and me. It is a story of love and permanent exchange, the «current» passes between us. I wish you all to live these moments. »

A dog’s behavior depends primarily on his education

« Since I realized that dogs are sensitive, intelligent beings, I have not stopped paying attention to their behavior, to better understand them. My method of education is based on the observation of the puppy to take into account his personality. It is important to listen to him.
Also, I do not sell my dogs to no matter who, but to masters respectful of the well-being of the dog, of his development at their side. »

Today, Patrick Morin attaches as much importance to the transmission of his method as to the education of puppies on his farm

For the past three years, the Central Canine Society has invited him at the Paris International Agricultural Showdogs to show young setters , a way of popularizing his method among the general public.
He regularly makes videos during periods of awakening the puppy’s qualities in the open field, in the underwood, imparting tips and advice. These videos are online on this site, you will also find a section providing answers to the fundamental questions that you ask to yourself.
And above all, Patrick Morin wrote a book with the help of his friend Patrice Eyrolles. Secrets of Keranlouan – Revolution in canine education. The book published by Éditions Récits is a great success and has already been translated into Italian, Spanish, English and Russian.

A book to learn how to educate your dog

This exciting book, full of intelligent advice, should be read before you start educating your dog, regardless of race.
Through his method of education, Patrick Morin, helps you to analyze the reactions of your puppy and guides you with a lot of pedagogy in the gestures and attitudes that should be adopted, while developing a beautiful complicity with the animal.

Is this method of dog training for duds also?
Yes ! If you are a beginner, the training tips developed in the book are at your fingertips. Patrick describes lived hunting situations or daily life to understand better his teachings and advice.

Patrick Morin’s book answers the questions of the masters