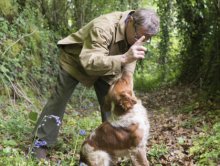 The dog must know who is the master

To decrease the aggressiveness of a dog, it is enough to “depersonalize” it, that is to say, decrease its audacity.

Aggression is often manifested in encounters with other animals, and then, once alone, your dog calms down. In fact, aggressiveness is like a fire whose embers are slowly consumed, but it is reborn at the slightest breath, and the flame flares up.

Blowing on fire is what aggressive dog owners do. They scream at it, get upset, get excited.

You have to do the opposite!

To decrease the aggressiveness of your dog, when he starts to get angry, make him feel like the sky is falling on his head.

Know how to correct your dog

For example, when your pet runs on the first comer, ask the master to keep the attacked dog on a leash and to walk around you. You also put your dog on a leash.

Take your dog out with a line

Overexcited he will seek to attack the other dog which turns him around. You let your dog arrive near his congener and, without saying anything, you whip him once with the end of the leash and not with a whip. But he must be in pain.

It’s going to sound like it should, but you have to hurt the dog to improve its quality of life, because its unbearable behavior causes too much annoyance between you, and interferes with your daily life, one and the other.

The next exercise is to walk your dog while keeping the possibility of recovering it quickly (you can put a 4-meter lanyard on it), and as soon as it growls and its hair rises, you whip it.

You will not be able to eliminate the aggressiveness of your dog, it is not desirable

Suppose his aggressiveness is at level 15, it must be lowered to 3 or 4. If it is zero, the dog will become the shadow of itself, it will no longer react. So it’s a delicate operation.

Between two aggressive choking exercises, it is important to walk the dog so that it gets oxygen and does pleasant things with you.

I save 3 dogs a year from certain death using this process. Indeed, the man who does not find the courage to correct his dog, does not sometimes hesitate to sign the authorization for euthanasia to the veterinarian, because the relationship with his dog has become hellish.